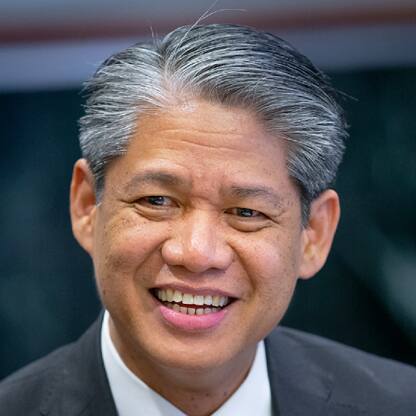 Gil C. Quiniones has served as President and Chief Executive Officer of the New York Power Authority (NYPA), the nation's largest state-owned electric utility, since 2011. As a member of New York Governor Andrew M. from Cuomo’s Cabinet, Mr. Quiniones directs aggressive, long-term Clean Energy Standard initiatives, ranging upgrading the state’s existing generation and transmission infrastructure to promoting the growth of renewable energy, new technologies, energy efficiency and electric transportation. Mr. Quiniones guided development of NYPA’s 2020 and 2030 strategic plans, setting an ambitious aspirational and practical path to rethink and revamp the nearly 90-year-old utility’s capabilities. This led to a bold, digital transformation that culminated in NYPA becoming one of the world’s first “digital utilities.” Placing a high priority on cultural change in the energy industry, he launched a 10-point Diversity, Inclusion and Equity initiative in 2020, with NYPA becoming the nation’s first utility to partner with the American Association of Blacks in Energy. Mr. Quiniones oversaw the integration of the New York State Canal Corporation into NYPA as a subsidiary. He is leading a $300 million gubernatorial initiative to Reimagine the Canals by transforming the 200-year-old waterway to focus on recreation, tourism and the resilience of canal communities. Mr. Quiniones is Chair of the GridWise Alliance and of the Alliance to Save Energy, and Vice Chair of the New York State Energy Research and Development Authority. He serves on the Boards of the Electric Power Research Institute, of which he is a past Chair, and the Large Public Power Council. He is NYPA's principal representative to the American Public Power Association. Before joining NYPA in 2007, Mr. Quiniones served in the administration of New York City Mayor Michael R. Bloomberg, including more than four years as Senior Vice President of Energy and Telecommunications. He previously worked for Con Edison for 16 years and was one of four co-founders of Con Edison Solutions, the utility's unregulated energy services company.