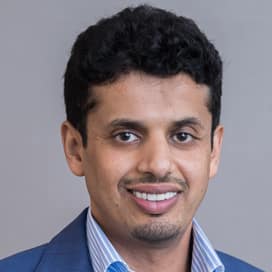 Dr. Ghaithan Al-Muntasheri is the Research and Development Director for Aramco Americas, the U.S.-based subsidiary of Saudi Aramco. In this capacity, he oversees all R&D activities in both Upstream and Downstream sectors for Aramco. Al-Muntasheri is responsible for Research Centers in Houston, Boston, and Detroit. Prior to his current assignment, Al-Muntasheri was the Chief Technologist of the Production Technology Team with the EXPEC Advanced Research Center of Saudi Aramco in Dhahran, Saudi Arabia. In that role, he managed the Saudi Aramco Research and Development portfolio of production operations spanning from well completion equipment and artificial lift to fluids chemistry. Al-Muntasheri was the lead and founder of the Production Technology Team at the Aramco Research Center, Houston. He served as Adjunct Associate Professor at Rice University from 2014 to 2020. Al-Muntasheri has published 100 patents applications, published papers in scholarly peer reviewed journals and presented at international conferences. He served as the Chairman of the SPE Saudi Arabia Section (SPE-SAS) for the term 2011-2012. Al-Muntasheri also served as the Chairman of the 2011 SPE-SAS Annual Technical Symposium and Exhibition. He has received several awards, including: the 2018 SPE Distinguished Member Award, the 2016 Outstanding Technical Award for SPE Production and Operations Journal, the 2015 Best Supervisor Award by Aramco Services Company, the 2015 Saudi Aramco President Award for Excellence and the 2014 SPE Outstanding Young Member Service award. Al-Muntasheri serves as a technical reviewer for SPE Journal, Journal of Canadian Petroleum Technology, and Arabian Journal for Science and Engineering. Al-Muntasheri holds both a Bachelor of Science and Master of Science both with honors in chemical engineering from King Fahd University of Petroleum and Minerals, Saudi Arabia, and a PhD in petroleum engineering with honors from the Delft University of Technology, The Netherlands.