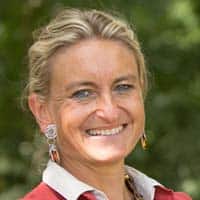 Gabrielle Gauthey is an experienced executive with strong local and international experience in investment, innovation, energy, digital economy. In June 2019, she is appointed at the executive committee of the GRP (Gaz, Rewables, Power) branch of Total, as SVP carbon neutrality businesses in charge of ventures, energy efficiency, carbon sinks (CCUS and nature-based solutions) and hydrogen. After starting her career in the French public sector, she is adviser to the French Minister for Space and Telecom in charge of the 199 6Telecom law. In 1998, as Deputy CEO of the Sofirad, she creates “Le SAT”, first video satellite bouquet to Africa, now Canalsatellite. In 2000, she becomes Head of the ICT Department at the Caisse des Dépôts, in charge of digital spatial planning. From 2003 to 2008, she is Commissioner at the French Regulatory Authority for Electronic Communications and Posts (ARCEP), and vice-chair of the ERG (European regulators’ group) From 2009 to 2015, she is Group Corporate Vice President of Alcatel-Lucent, member of the Executive Committee, in charge of Public sector, governmental projects and Defense. From February 2015 to May 2018, Gabrielle Gauthey is the EVP at the Caisse des Dépôts, in charge of investment in infrastructure, real estate, energy, telecom. She is the former President of the innovation Commission of MEDEF (French business association) She sits at the board of Gecina, Radiall and GFI and is a member of the French Academy for Technologies Gabrielle Gauthey is a graduate of the Ecole Polytechnique, Ecole des Mines.