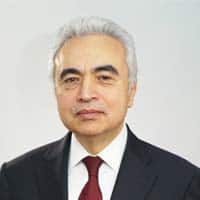 Dr. Fatih Birol has served as the Executive Director of the International Energy Agency (IEA) since September 2015. Under Dr. Birol’s leadership, the IEA has undertaken its first comprehensive modernization program since its creation in 1974. This effort focuses on three pillars: opening the doors of the IEA to include major emerging countries, broadening the IEA’s energy security mandate, and making the IEA the global hub for clean energy technologies and energy efficiency. Prior to his nomination as Executive Director, Dr. Birol spent over 20 years at the IEA, rising through the ranks to the position of Chief Economist. He has been named by Forbes Magazine as among the most influential people on the world’s energy scene and was recognized by the Financial Times in 2017 as Energy Personality of the Year. Dr. Birol chairs the World Economic Forum’s (Davos) Energy Advisory Board and serves on the UN Secretary-General’s Advisory Board on “Sustainable Energy for All.”