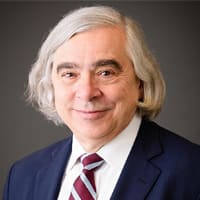 Dr. Ernest J. Moniz is the Chief Executive Officer of EJM Associates and Energy Futures Initiative (EFI). He served as the thirteenth US Secretary of Energy where he advanced energy technology innovation, nuclear security and strategic stability, cutting-edge capabilities for the American scientific research community, and environmental stewardship. Dr. Moniz also led an international initiative placing energy science and technology innovation at the center of the global response to climate change and negotiated the historic Iran nuclear agreement alongside the Secretary of State. Previously, Dr. Moniz served as Under Secretary of Energy from 1997 until January 2001. Before that, he was the Associate Director for Science in the Office of Science and Technology Policy where he was responsible for the physical, life, and social sciences. From 1973 to 2013, Dr. Moniz was a member of the Massachusetts Institute of Technology faculty. He is also Chief Executive Officer of the Nuclear Threat Initiative and Co-Chairman of the Board of Directors. He was the Founding Director of the MIT Energy Initiative and Director of the Laboratory for Energy and the Environment. Dr. Moniz received a Bachelor of Science degree summa cum laude in physics from Boston College, a doctorate in theoretical physics from Stanford University, and several honorary doctorates.