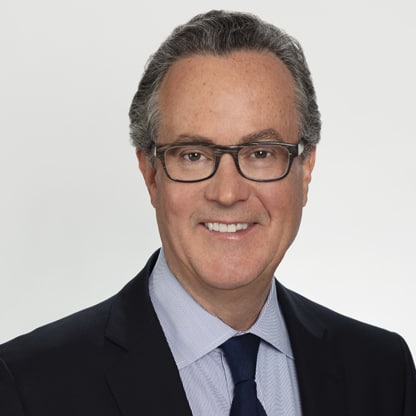 Doug Peterson has served as President, Chief Executive Officer and a member of the Board of Directors of S&P Global since 2013. He joined the company in 2011 as President of its credit ratings business. Mr. Peterson has repositioned S&P Global to power the financial markets of the future with data, analytics and benchmarks. Under his leadership, the company has steadily made investments in people, international expansion, cutting-edge technology, innovation and environmental, social and governance, or ESG, solutions. In February of 2022, S&P Global completed a transformative merger with IHS Markit to create powerful new solutions for customers. The combination and Mr. Peterson’s focus on the customer has enabled S&P Global’s 35,000-plus people to deliver deeper insights, expertise and serve as a trusted source of information for corporate decision makers and world leaders. Mr. Peterson is a leading voice on ESG issues. He chairs the Bipartisan Policy Center’s ESG Taskforce, and in 2021 he led a workstream of the G7’s Impact Taskforce focused on mobilizing private capital for public good by advocating for globally consistent standards to measure, value and account for sustainability. At S&P Global, Mr. Peterson created a new organization within the company, Sustainable1, to be a single source of intelligence for customers navigating the transition to a low carbon, sustainable and equitable future. Before joining S&P Global, Mr. Peterson was the Chief Operating Officer of Citibank, N.A., Citigroup’s principal banking entity. Over his 26 years at Citigroup, he served as Chief Auditor, CEO of Citigroup Japan and in leadership roles in Latin America. Mr. Peterson chairs the U.S.-Japan Business Council and is a member of the Boards of Directors of the Japan Society and the National Bureau of Economic Research. He also is a member of the Council on Foreign Relations and the New York Stock Exchange Board Advisory Council. In addition, he serves on the Advisory Board of the Federal Deposit Insurance Corporation’s Systemic Resolution Advisory Committee and as a Trustee of Claremont McKenna College and the Paul Taylor Dance Company. Born and raised in New Mexico, Mr. Peterson received an MBA from the Wharton School at the University of Pennsylvania and an undergraduate degree from Claremont McKenna College.