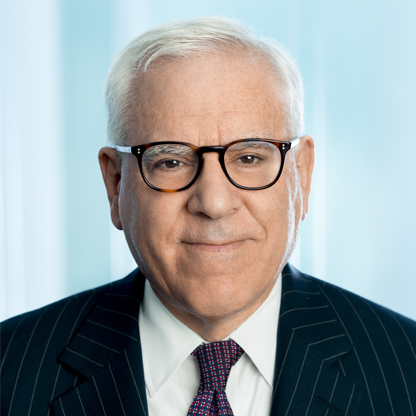 David M. Rubenstein is Co-Founder and Co-Chairman of The Carlyle Group, one of the world’s largest private investment firms. He is a 1970 graduate of Duke University and a 1973 graduate of the University of Chicago Law School. He served as Chief Counsel to the U.S. Senate Judiciary Committee’s Subcommittee on Constitutional Amendments before becoming the Deputy Assistant to the President for Domestic Policy during the Carter Administration. He also practiced law in both New York City and Washington, D.C. Mr. Rubenstein is Chairman of the Boards of the John F. Kennedy Center for the Performing Arts, the Council on Foreign Relations, the National Gallery of Art, the Economic Club of Washington, and the University of Chicago; a Fellow of the Harvard Corporation; a Trustee of the World Economic Forum; and a Director of the American Academy of Arts and Sciences, among other board seats. Mr. Rubenstein is an original signer of The Giving Pledge; the host of The David Rubenstein Show and Bloomberg Wealth with David Rubenstein; and the author of The American Story, How to Lead, The American Experiment, and How to Invest.