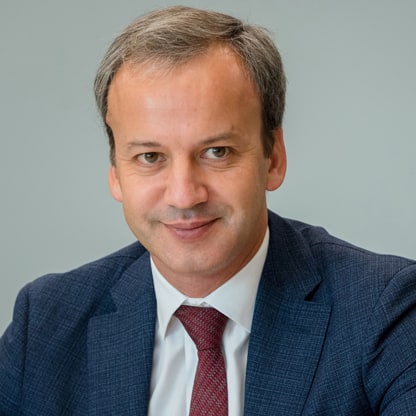 Arkady Dvorkovich is the Chairman of Skolkovo Foundation, a non-commercial organization, which functions as the managing company of the Skolkovo Innovation Center. Mr. Dvorkovich is also the President of FIDE (International Chess Federation). In 2018 he chaired the Local Organizing Committee of FIFA World Cup. He served as Deputy Prime Minister of the Russian Federation from 21 May 2012 to 7 May 2018. Mr. Dvorkovich served as an Aide to the President of the Russian Federation, Dmitry Medvedev, from 13 May 2008 to 21 May 2012. According to the 31 December 2009 Decree of President Dmitry Medvedev, he joined a working group for the creation of a detached territorial complex for research and development and further commercialization of the results. From 2004 to 2008, Mr. Dvorkovich was Head of the Presidential Experts’ Directorate of the Presidential Executive Office. He was Deputy Minister of Economic Development and Trade for the Russian Federation in 2001. From 1997 to 2000, Mr. Dvorkovich was Head of the Economic Expert Group of the Russian Ministry of Finance and from 1994 to 1997, he worked as an Expert for the group. Mr. Dvorkovich holds a master’s degree in Economics from Moscow State University (Russia) and Duke University (USA).