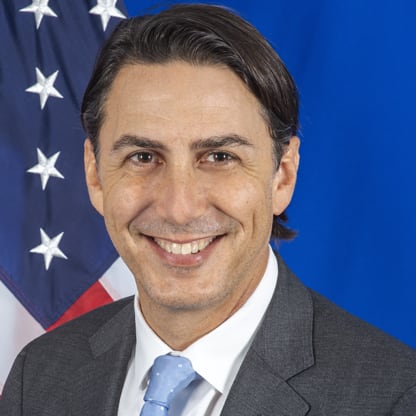 Amos J Hochstein currently serves as the Senior Advisor for Global Energy Security at the U.S. State Department. He began his tenure with the Department in 2011, when he was appointed Deputy Assistant Secretary of State. From 2014 to 2017 he served as Special Envoy and Coordinator for International Energy Affairs and led the Department’s Bureau of Energy Resources. He has served in a variety of roles in the private sector and Capitol Hill. He was the Senior Policy Advisor to the Foreign Affairs Committee of the U.S. House of Representatives and also worked as an advisor to Senators Chris Dodd (D-CT) and Mark Warner (D-VA). Additionally, he worked as an advisor and Executive Vice President of International Operations at Cassidy & Associates. Throughout his career, he has been a counselor for both domestic and international oil and gas companies, as well as companies focusing on renewable energy assisting corporations in assessing potential new markets, the development of alternative sources of power, and best strategies to bring them to market. Hochstein has served on the board of the Atlantic Council and as a Non-resident Fellow at the Harvard Kennedy School’s Belfer Center.