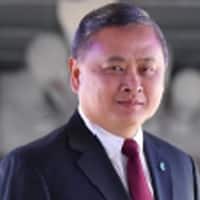 Adnan Zainal Abidin was appointed as the Chief Operating Officer, PETRONAS effective 1st February 2022 and he has been the Executive Vice President (EVP) & Chief Executive Officer (CEO) of Gas Business of PETRONAS since 16th October 2019. Adnan was a PETRONAS scholar and holds a Bachelor of Science in Chemical Engineering from the University of Leeds, UK. Prior to his most recent appointment, Adnan was the Senior Vice President (SVP) of Project Delivery & Technology (PD&T) in PETRONAS since April 2019. Joining PETRONAS in 1984, Adnan have spent a total of 38 years in the company, in a career which covers various portfolios and positions, from Petrochemicals to LNG, both in projects and operations, as well as in Malaysia and overseas. Prior to April 2019, Adnan was the VP of LNG Assets, overseeing PETRONAS’ key domestic and international LNG Assets including PETRONAS LNG Complex (Malaysia), PETRONAS Floating LNG SATU & DUA, Gladstone LNG (Australia), Egyptian LNG (Egypt), and LNG Canada. Prior to October 2017, he was the President & CEO of Pacific Northwest LNG (Canada). Leading up to the VP of LNG Assets post, Adnan was the VP of Global LNG Projects overseeing numerous PETRONAS’ key domestic and International LNG projects. Prior to that, he was the CEO of Egyptian LNG for 4 years and CEO at PETRONAS Ammonia, having spent almost ten years in the petrochemical facility in various senior management roles. He also served in PETRONAS Fertiliser Kedah and ASEAN Bintulu Fertiliser (ABF), building his career from when he started there as a Trainee Engineer in 1984. In his prolific career to-date, some of the most notable achievements include leading the completion of the first floating LNG plant in the world, PFLNG SATU, as well as its relocation from kumang, Sarawak to Kebabangan in Sabah. This project was a game-changer for PETRONAS and the industry in that enabled the monetisation of stranded gas fields economically and has gained global recognitions and awards. Besides that, he was also instrumental in completing the MLNG Train 9 project, which was world’s first boil off reliquefication project. Adnan is currently the Chairman of PETRONAS Gas Berhad (PGB), MLNG Group of Companies, PETRONAS LNG Sdn. Bhd. (PLSB) and PETRONAS Canada LNG Ltd. (PCLL). He is also serving as a Director in PETRONAS Carigali Sdn. Bhd. (PCSB) and PETRONAS International Corporation Ltd. (PICL). Adnan is married, has 3 kids, and loves good food and travelling.