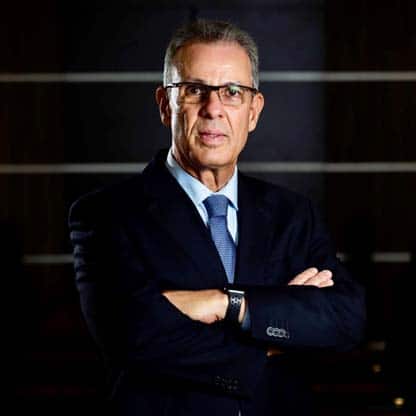 Born in Rio de Janeiro, Minister of Mines and Energy, Admiral of Squadron Bento Albuquerque, 62, was Director-General of Nuclear and Technological Development of the Navy, in charge of the Submarine Development Program and the Navy Nuclear Program. He started his military career in 1973 and held the posts of Submarine Officer, Chief of Staff of the Navy, Chief of Staff of the Navy Commander and Commander in Chief of the Squadron. Bento Albuquerque took Postgraduate Courses in Political Science at the University of Brasilia; MBA in Public Management at Fundação Getúlio Vargas; and MBA in International Management at COPPEAD of the Federal University of Rio de Janeiro, in addition to Military Courses at the School of Naval War and High Studies in Politics and Strategy at the Superior School of War. Doctor in Naval Sciences. In the National Congress, he served as Parliamentary Advisor to the Office of the Minister of the Navy and as Parliamentary Chief Advisor to the Commander of the Navy. His international experience includes the position of Director General of the American Defense Board (JAD) at the Organization of American States (OAS) in Washington DC, USA; and of United Nations (UN) Military Observer during the Bosnian War - Sarajevo and Dubrovnik. Former President of the Board of Directors of “Blue Amazon Defense Technologies Inc.”(AMAZUL), he is currently Chairman of the Board of Directors the Energy Research Office (EPE) and is a member of the Council of Administration of Petrobras and Itaipu Binacional. In 2019, Minister Bento Albuquerque was granted the "Personality of the Year" Award by the National Federation of Fuel, Natural Gas and Biofuel Distributors - BRASILCOM; and the "100 Most Influential of the 2019 Energy" Award, in the "Public Personalities" Category, by the Full Energy Magazine, of the Media Group.