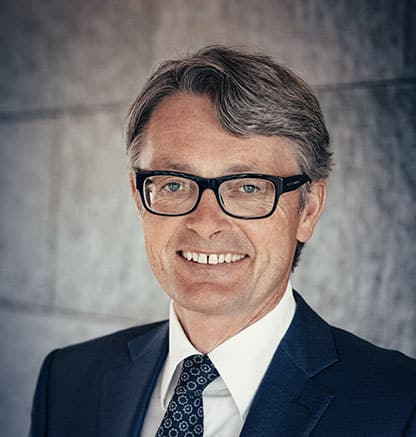 Øyvind Eriksen is President and CEO of Aker ASA, a Norwegian industrial investment company with ownership interests concentrated in oil and gas, maritime assets, marine biotechnology, and industrial software. Aker is the largest shareholder, directly or indirectly, in nine companies listed on the Oslo Stock Exchange. Aker and companies in which Aker is the largest investor had a total turnover of about $9.5 billion in 2019, and a workforce of approximately 37,000, including temporary hires. About 21,000 of the workforce is in Norway. In his role, Øyvind is responsible for leading Aker as a driving force for the development of knowledge-based industry through active ownership that develops well-functioning companies that offer products and services in an environmentally, ethically, and socially responsible manner. Øyvind is chairman of the board of Aker BP ASA, Cognite AS, REV Ocean, and Aker Capital AS, and serves on the board of several other companies, including Aker Solutions ASA, Aker Carbon Capture AS, Aker Energy AS, Akastor ASA, the Resource Group TRG AS, TRG Holding AS, and the Norwegian Cancer Society. Øyvind joined the Norwegian law firm BA-HR in 1990, where he became a partner in 1996 and a director/chairman in 2003. As a corporate attorney, he worked in areas such as strategic and operational development, M&A. and negotiations. Øyvind has held several board positions in different industries, including shipping, finance, asset management, offshore drilling, fisheries, media, trade and industry. He has a law degree from the University of Oslo.